On Friday, 28 October at 5.30 pm Mónica Mays will be performing Nail that Stems / Chapter 1 alongside her work Extra Irregular Pearls at Her Legs, an Egg, Her Toil(e) and Blankets at Tallinn City Gallery. The exhibition, curated by Keiu Krikmann, looks at material and especially textile as a vessel for fiction and the possible meanings it carries throughout its cycle of life. Evoking the image of a silkworm moth (Bombyx mori), Mays’ performance traces biological, cultural and industrial reproductive mechanisms through a series of texts, voices and poems.

“The labyrinth is a linear architecture – a single, continuous path from entrance to centre, while the maze is more disorienting, featuring branching paths, loops, blind alleys and multiple solutions. Bombyx mori, the silkworm moth, knows how to produce both. Before pupation, the Bombyx mori worm wraps its body up in a single, 900 metre line of silk, slowly turning and winding this thread innumerable times into a layered cocoon, building a labyrinth with a single starting point, and placing itself at the end. However, when the young albino moth is ready to emerge, it secretes an enzyme that dissolves an escape hatch in the silk. This cuts through the single line of thread in a thousand places, turning the labyrinth into a maze of a thousand broken paths, and rendering it nearly worthless for human weaving. In silk textile production, therefore, one must kill the creature at the centre of the labyrinth before it can transform, and then painstakingly unravel its cocoon, retracing the steps of the worm’s complex spirals and unwind it back into a single, continuous line.” – Text by Tom K. Kemp

Mónica Mays’ work consists of sculptures, performances and archival images. She has a background in cultural anthropology that informs their site-specific practice, enmeshing biography, historical archive and mythology. Her pieces often take the shape of animated domestic objects that are spilling over, optically distorted or in a process of transmutation. She considers materials and objects through their production and reproduction, searching for logics of meaning-making and identity under alienating systems of production and exchange. Currently, she has been working with pre-patriarchal narratives, nature-culture cannibalisms, perspective and the Neo-Baroque.
Her work has recently been exhibited in institutions such as Frascati Theater (NL), Centro Centro (ES), Dutch Design Week (NL), Rupert (LT) and La Casa Encendida (ES) and in galleries and independent spaces such as Punt WG (NL), Industra (CZ), Nosbaum Reding (BE/LU) and Salón (ES). Recently they were awarded the prizes 3PD by Amsterdam Fonds voor de Kunst, Young Artist Stipendium by Mondriaan Fonds and Generación 2022 by the Fundación Montemadrid.
Keiu Krikmann is a writer, curator, translator and editor based in Tallinn. Currently, she is the managing editor of A Shade Colder Magazine, published by the Estonian Centre for Contemporary Art. Since 2015, she has been part of the core team of the Tallinn Applied Art Triennial. Previously, she has been the coordinator of the project space Konstanet and worked as a gallerist at the Estonian Academy of Arts. Her most recent curatorial project Excess and Refusal was exhibited at Kim? Contemporary Art Centre, Riga in 2020 and at the Contemporary Art Museum of Estonia in 2021.
Duration of the performance: 20 minutes. Free entry.
Facebook Event

Her Legs, an Egg, Her Toil(e) and Blankets 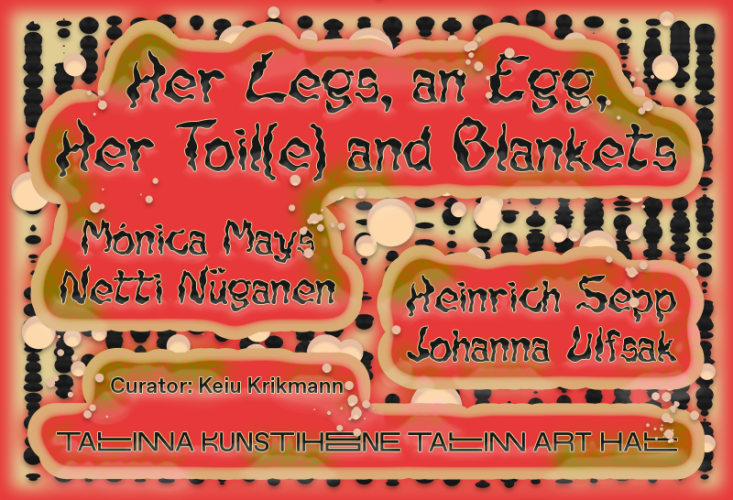