Join us for a talk between artist Olga Jürgenson and curator Anders Härm on Wednesday, 26 January at 6pm (UTC +2)!

We are pleased to host this talk in parallel with Olga Jürgenson’s exhibition “Le Bordel Synthétique”, which is currently being held at Tallinn Art Hall Gallery, Estonia, until the 30th of January 2022. “Le Bordel Synthétique” is a part of Olga’s ongoing artistic research that offers a female perspective on the connection between hardwired human sexuality, societal conditioning and notions of romantic love, in the context of relationships between humans, objects and Artificially Intelligent sex partners.

In 2017 a hyper-realistic sex dolls with artificial ‘brains’ connected to sensors in their body were first released. In the same year the first sex doll brothel appeared in Barcelona, and during the followed years similar establishments have spread across Europe. According to some researchers the sex dolls promote a healthy sex life and consequently sex doll brothels should be encouraged; there is even a hope that such brothels will reduce the problem of sex trafficking and decrease violence against women.

It is important to highlight however that it is mainly the development of artificially intelligent and human-like sex partners for men that is progressing; vibrators, which seem to be the women’s equivalent to the latter don’t look like humans and cannot talk. Equally, there are still no brothels with either real or artificial partners for women.

Le Bordel Synthétique is Olga Jürgenson’s artistic survey of artificial sex partners currently marketed to men and women, as well as her observations on their possible impact on humanity. Along with being Olga’s artistic vision for ‘the world’s first synthetic brothel’, Le Bordel Synthétique is also her vision for the ‘world’s first democratically unisex brothel’, as it’s ‘accessible’ not only to men but all adults, including women and transgender.

Olga Jürgenson is a multidisciplinary artist based in Cambridge (UK), working and exhibiting internationally. Olga has participated in many significant group exhibitions globally, including the 56th Venice Biennale, MANIFESTA 10, Liverpool, Moscow and Ural biennials. Jürgenson was awarded numerous grants and awards from several European art foundations (1998 – 2021); in 2011 she was nominated for the Kandinsky Prize (Moscow, Russia), in 2020 and 2021 during the pandemic Olga’s experimental work was supported by Arts Council England. Some of her recent solo exhibitions were at Vabaduse Gallery in Tallinn, Estonia (2018), Espronceda Centre for Arts and Culture, Barcelona, Spain (2018), New Hall Art Collection, University of Cambridge, UK (2014), the State Hermitage Museum, St Petersburg, Russia (2013), amongst others. Jürgenson was awarded numerous scholarships and residencies, which included AA2A, Anglia Ruskin School of Art, UK 2013-2014, In Flux Escalator retreat at Wysing Arts Centre (Cambridge, UK, 2010); pARTage (Flick-en-Flack, Mauritius, 2008); PVA Medialab, IDAT, University of Plymouth (UK, 2004), and others. Olga’s works are in state and private collections across the world, including The State Russian Museum, National Centre for Contemporary Art (Russia), Oulu Art Museum (Finland), British Film Institute, London (UK), The University of Cambridge (UK). Olga curated the National Pavilion of Mauritius at the 56th and 57th Venice Biennale, as well as art programme at Pushkin House in London (2015-2017).
Anders Härm is an art historian, curator and an academic. He lectures on contemporary art at the Institute of Art History and Visual Culture and is the Head of the MA programme in Curatorial Studies at the Estonian Academy of Arts. He was one of the founders, and later a head of the Estonian Museum of Contemporary Art (2009-2015); prior to that Anders had worked as a curator at Tallinn Art Hall (2002-2012). Amongst numerous national and international exhibitions, festivals and events that Härm curated, are the National Estonian Pavilions at the 50th Venice Art Biennale, and, at the 7th Venice Architecture Biennale (the latter together with Tarmo Maiste). His most recent curated exhibitions include a retrospective solo exhibition of Ando Keskküla “Reality and Technodelics”(2020, KUMU Art Museum, Tallinn), international group exhibition “Xenos” at the EKKM (2019) and a historical survey exhibition “X Files. Registry of the 90s” (2018/1019, KUMU Art Museum, Tallinn, together with Eha Komissarov). Along with his contributions for TV and radio, he has written for many publications, his book Disobedient Bodies. Lectures on Performative Practices of the 20th and 21st Century will be published by EKA Kirjastus in 2022 in Tallinn. Härm lives and works in Tallinn.
The talk will include presentation of exhibited works and installation shots by the artist.
The event will be held in English, on Zoom: https://us02web.zoom.us/j/83794686114 and will be streamed online to the Tallinn Art Hall Facebook Page. Entrance is free, duration 1h.
The exhibition “Le Bordel Synthétique” is on at Tallinn Art Hall Gallery, until the 30th of January.
Facebook Event 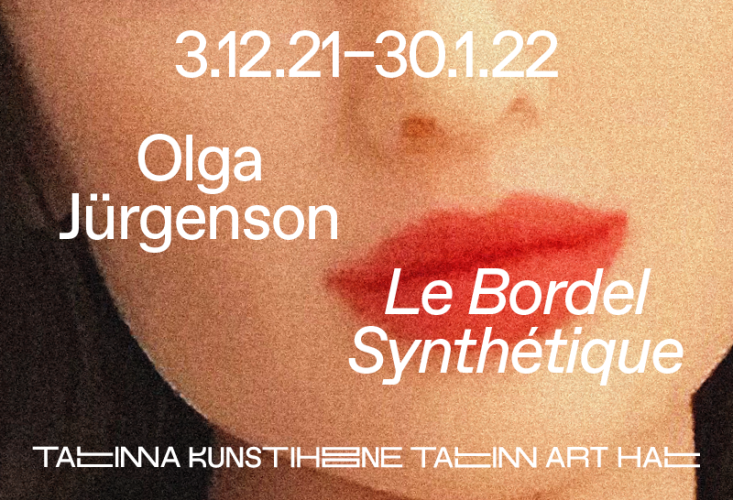