From 14th to 16th July Tallinn Art Hall will host the public programme of the exhibition „Signals from the Periphery“ which includes lectures, performances, film screenings and a pop-up bar.

Entrance with the exhibition ticket – 3€ / 5€. It is also possible to purchase an 8€ ticket that gives access to the Art Hall during the whole weekend.

Timetable on Saturday the 16th of July:

Music For Your Plants live

Bar open throughout the evening; music provided by exhibiting designers and artists

Paul Elliman (1961, UK) is an artist based in London. His work follows language through many of its social and technological guises, in which typography, human voice and bodily gestures emerge as part of a direct correspondence with other visible forms and sounds of the city. He has exhibited widely in venues such as the ICA and Tate Modern in London, the New Museum and MoMa in New York, and this year with solo exhibitions As You Said at KW Institute for Contemporary Art in Berlin, and The Heralds, currently on at La Salle de Bains in Lyon.

The work of Daniela&Linda Dostalkova (CZ) deals with the concept of the autonomous hybrid social ‘art practice’—blurring the lines between disciplines, challenges accepted distinctions, in questioning of identity. Since 2016 they are providing an alternative service in terms of para-agency Institutional Homeopathy©. They trace unexpected articulations of alternative/commodified forms of organizations that are based in the art world and its institutional structures; understanding social phenomena, objects, things, and concepts and the fluidity of boundaries between them. Daniela&Linda position themselves as artists, curators, co-authors and commissioners at the same time, aiming to achieve a complex statement delivered to the viewer.

Niko Mihaljević (CR) is a conceptual artist, graphic designer and transmedia mythographer who lives and works in Zagreb. He studies at the Werkplaats Typografie, ArtEZ Institute of the Arts, Arnhem. His artistic practice explores the metaphysical aspects of the everyday, cultural artefacts and language in a variety of media with an emphasis on conceptual sound art, performance, text, and artist books.

Music For Your Plants is an ongoing sound / art project active since 2010 in various forms. The project has manifested in concept albums, installations, visual essays and collaborations with international artists. Notable collaborations include a soundtrack for the China Pavilion in the 56th Venice Biennale, an audiovisual web-installation with DISmagazine, a solo-show in Konstanet gallery and a visual essay for the online platform Ofluxo. With roots in world music the project has grown into a distinct venture in sonic globalism.

Signals from the Periphery

Public programme during „Signals from the Periphery“ 15.07 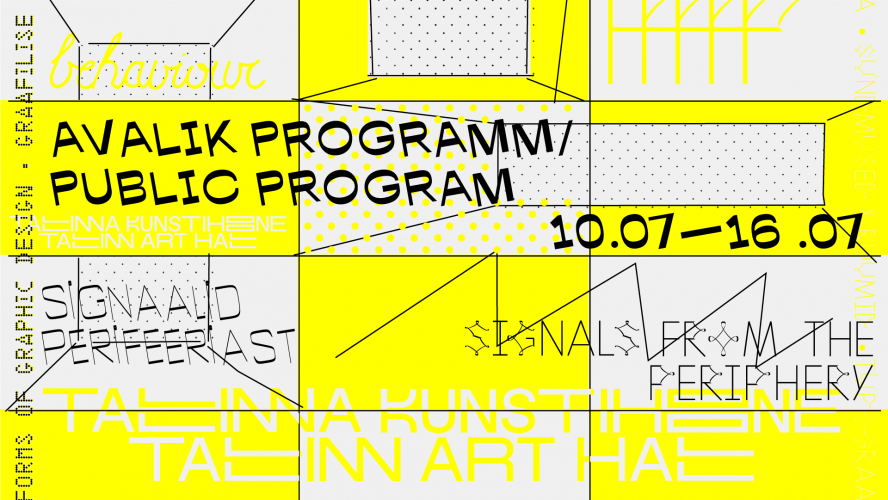 Public programme during „Signals from the Periphery“ 14.07

Workshops during „Signals from the Periphery“